Do the Magi Belong in Manger Scenes?

When King Herod heard this he was disturbed, and all Jerusalem with him. –  Matthew 2:3

It seems every Christmas there is a myth buster who will tell us that 3 figures in our manger scenes do not belong there.

Next to the shepherds, sheep, cows, and the holy family are the wise men, kings or magi. Critics graciously remind us that we don’t know how many there were, and they likely arrived a couple of years later. And they probably weren’t kings, despite the shape of the figurines and the title of the famous song. 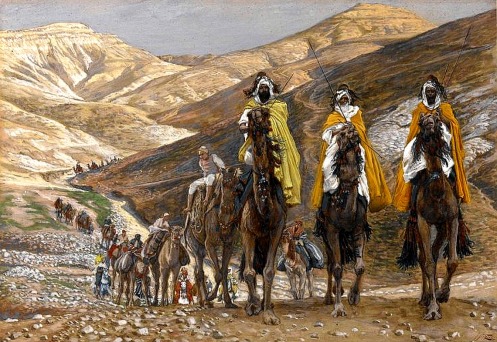 The Magi Journeying, by James Tissot

Such myth busting does not concern me. I paid too much money for my manger scene to leave out three pieces until January. Also, the magi are extremely  important precisely because they DO NOT belong there.

These magi were likely “magicians,” not like Harry Potter, but more like astrologers. They were the type that would write the daily horoscopes for the Baghdad Daily News. To 1st century Jews, they are pagan astrologers from enemy territory.

Imagine the chaos that would ensue if officials from Iraq, Syria or Iran were to approach Prime Minister Netanyahu. They want to know where to find a new Israeli leader – all based on reliable intelligence that was unavailable to Israel. That’s pretty much what the magi are doing. Early readers of Matthew 2:1-12 were probably shocked and possibly offended by their inclusion in this story.

Imagine putting out of place figures in manger scenes in churches and front lawns: Batman could be standing on the roof of the manger. The Avengers, who were watching their sheep at night, could be visiting the newborn Jesus. Garden trolls, instead of cows and sheep, could be gathered around the manger.

People might be shocked and offended by these figures that do not belong on a manger scene. But people would stop their cars and pay attention.

Shocking misplacements persist throughout the Gospels: Samaritan adulterers, immoral prostitutes, corrupt tax collectors, despised Roman soldiers, and ostracized lepers, and pagan astrologers: Often God chooses to reveal himself to people who do not belong, not to “devout” believers.

If you have 3 king-like magi in your manger scenes, please know that they do not belong. This is precisely why we need to keep them there.

Where do we get our beliefs? Three theological perspectives have significantly shaped my Christian identity: Evangelicalism, the early Methodist tradition and liberation theology. From my coming to faith in a Baptist church and throughout my education in a Baptist school and college, I was nurtured by convictions that emphasized a spiritual rebirth, a personal relationship with Jesus Christ and the centrality of the Bible. Even when I disagree with certain aspects of evangelicalism, it has deeply influenced my sense of what it means to be a follower of Jesus Christ. My seminary studies spawned my interest in early Methodism, particularly its approach to spiritual formation. Its leaders were convinced that only a foundation of doctrine and discipline would lead to a meaningful transformation of the heart and mind. In other words, having the mind of Christ enables me to be more like Christ. Life in a suburban culture obscures the increasing gap between the poor and rich, as well as the Bible’s close identification with the poor. My doctoral work in socio-cultural context exposed me to liberation theology, which helps me see redemptive history as a history of oppressed groups, written from the perspective of the powerless, about a God who is actively involved with the poor in their struggles. I am now the pastor at Huntingtown United Methodist Church in Calvert County, Maryland. Together my wife and I are raising 4 young theologians.
View all posts by Corey Sharpe →
This entry was posted in christianity, Christmas, Persian Empire and tagged christianity, Epiphany, Magi, manger, manger scene, shepherds, wise men. Bookmark the permalink.

2 Responses to Do the Magi Belong in Manger Scenes?