“In those days a decree went out from Caesar Augustus that all the world should be registered” (Luke 2:1).

It’s easy to feel insignificant in a world of seven billion people, where news headlines are dominated by political and economic movements, led by people with power and prestige. Don’t be disheartened, for Christmas serves as a constant reminder that these mammoth forces are not the authors of redemptive history. 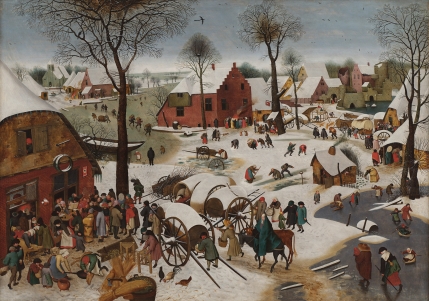 While the powerful often use the common people for their own purposes, the Christmas story reminds us that God uses them – even without their knowing it – to serve the kingdom of God. God used the oppressive power of Rome, who decreed that insignificant Mary and Joseph be registered in their hometown, to fulfill the prophet’s Micah’s prophecy:

“But you, Bethlehem Ephrathah, though you are small among the clans of Judah, out of you will come for me one who will be ruler over Israel” (Micah 5:2).

Do not think that, because our well being is often dependent on government policies and corporate practices, God’s purposes are thwarted. God seeks our holiness, not our prosperity.  To that end, God rules the whole world. As Proverbs 21:1 says, “In the Lord’s hand the king’s heart is a stream of water that he channels toward all who please him.”

The Christmas story gives us hope that God is for the little people. We have great cause to rejoice because presidents, CEO’s and other billionaires of the world follow the sovereign decrees of God, so that we, the little people, might be conformed to the image of that peasant baby who was born in a manger.

Where do we get our beliefs? Three theological perspectives have significantly shaped my Christian identity: Evangelicalism, the early Methodist tradition and liberation theology. From my coming to faith in a Baptist church and throughout my education in a Baptist school and college, I was nurtured by convictions that emphasized a spiritual rebirth, a personal relationship with Jesus Christ and the centrality of the Bible. Even when I disagree with certain aspects of evangelicalism, it has deeply influenced my sense of what it means to be a follower of Jesus Christ. My seminary studies spawned my interest in early Methodism, particularly its approach to spiritual formation. Its leaders were convinced that only a foundation of doctrine and discipline would lead to a meaningful transformation of the heart and mind. In other words, having the mind of Christ enables me to be more like Christ. Life in a suburban culture obscures the increasing gap between the poor and rich, as well as the Bible’s close identification with the poor. My doctoral work in socio-cultural context exposed me to liberation theology, which helps me see redemptive history as a history of oppressed groups, written from the perspective of the powerless, about a God who is actively involved with the poor in their struggles. I am now the pastor at Huntingtown United Methodist Church in Calvert County, Maryland. Together my wife and I are raising 4 young theologians.
View all posts by Corey Sharpe →
This entry was posted in christianity, religion and tagged Christmas, Democratic Party, Democrats, Donald Trump, GOP, Hillary Clinton, Micah 5:2, Religion and Politics, Republican Party, Republicans. Bookmark the permalink.

1 Response to Political Parties, Corporations, and a Peasant Baby.