Did the Apostle Paul have Epilepsy?

I was diagnosed with Epilepsy when I was 5th grade, and have been taking anti-seizure drugs ever since. I continue to experience the peaks and valleys of having a chronic medical condition. Medication that works as a teenager may not work as an adult. 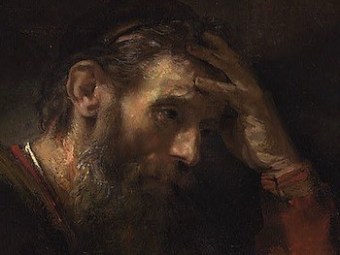 Paul in Prison by Rembrandt

Or it may cause side effects.

When I was 18 years old, God began to push me in exciting new directions. I dove headfirst into church life, and I found myself waking up at night and reading Scripture and praying. One night I read the following passage from Paul:

“I was given a thorn in my body because of the outstanding revelations I’ve received so that I wouldn’t be conceited. It’s a messenger from Satan sent to torment me so that I wouldn’t be conceited. I pleaded with the Lord three times for it to leave me alone. He said to me, “My grace is enough for you, because power is made perfect in weakness.” (2 Corinthians 12:7-9)

Whenever my epilepsy raises its ugly head, I remember this passage, because some historians have suggested that Paul may have had epilepsy. (Acts 9:3-9; Galatians 4: 13-14). I’m not certain that Paul had epilepsy, but even the suggestion helps me remember 2 Corinthians 12. Paul knew what it was like to have a chronic medical condition. It didn’t stop him from traveling the Roman Empire and planting churches, but it was severe enough for him to plead with God to take it away. Some days I think I know how he felt. I don’t have seizures of the “fall down and convulse” variety. I do have simple partials and sometimes even complex partials. They don’t keep me from functioning as a pastor, but they are serious enough that I wish to God they didn’t happen. And yet they sometimes do. Until the day I am completely seizure free, I must remember God’s promises to the afflicted. This applies to all of us who suffer from a chronic illness:

““My grace is enough for you, because power is made perfect in weakness.”

Where do we get our beliefs? Three theological perspectives have significantly shaped my Christian identity: Evangelicalism, the early Methodist tradition and liberation theology. From my coming to faith in a Baptist church and throughout my education in a Baptist school and college, I was nurtured by convictions that emphasized a spiritual rebirth, a personal relationship with Jesus Christ and the centrality of the Bible. Even when I disagree with certain aspects of evangelicalism, it has deeply influenced my sense of what it means to be a follower of Jesus Christ. My seminary studies spawned my interest in early Methodism, particularly its approach to spiritual formation. Its leaders were convinced that only a foundation of doctrine and discipline would lead to a meaningful transformation of the heart and mind. In other words, having the mind of Christ enables me to be more like Christ. Life in a suburban culture obscures the increasing gap between the poor and rich, as well as the Bible’s close identification with the poor. My doctoral work in socio-cultural context exposed me to liberation theology, which helps me see redemptive history as a history of oppressed groups, written from the perspective of the powerless, about a God who is actively involved with the poor in their struggles. I am now the pastor at Huntingtown United Methodist Church in Calvert County, Maryland. Together my wife and I are raising 4 young theologians.
View all posts by Corey Sharpe →
This entry was posted in Uncategorized and tagged christianity, complex partials, epilepsy, grand mal, healing, Jesus, prayer, seizures, sickness, simple partials, suffering, the apostle paul, theology. Bookmark the permalink.

2 Responses to Did the Apostle Paul have Epilepsy?