The Compassion of Judas Iscariot 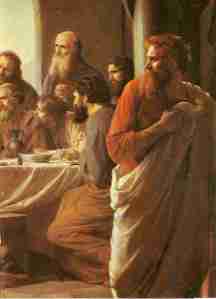 The name of Judas Iscariot went down to the pages of history as the man who betrayed Jesus. Luke attributes this to Satan.  Matthew and Mark say it was because of greed.  John points to both, and also adds theft as a motivation (John 12:1-8).  I think if we could travel back in time to the first century and actually see Jesus and His disciples, we wouldn’t see Judas Iscariot as the sinister man we would suspect. In fact, he might even appear to be compassionate.

For example, when Mary began to wipe Jesus’ feet with expensive perfume Jesus was deeply touched, but it was Judas who pointed out that this costly perfume should have been sold and the money given to the poor (John 12:1-8). Those listening may have thought, “That’s a good point.  You know, Judas is a good steward, and he has his priorities straight.”

8 Responses to The Compassion of Judas Iscariot