The Horror of War (Even the Biblical Ones)

Whenever we read or hear about war in the news, we shouldn’t ignore its terrifying realities. War results in the taking of human lives by other human beings. The soldier dying in the battlefield is killed by a person who never knew him personally. Civilians are killed because they live in a place where soldiers drop bombs. Wars also result in long-term damage to homes, cities, and economies. American soldiers and Vietnamese citizens still suffer the effects of Agent Orange. 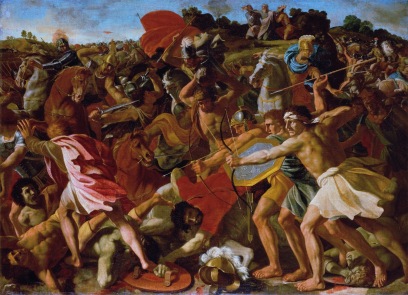 Joshua’s Victory over the Amalekites, by Nicolas Poussin

I am a spectator when it comes to war. I can watch graphic documentaries or listen to a disabled veteran tell his story, but I will never appreciate the full impact of war. However, recognizing its horrific consequences can change the way I read history or a newspaper.

Such awareness can also affect the way I read the Bible. There we read of wars being used as instruments of God’s judgment on people who oppressed weaker nations and practiced unrestrained forms of paganism that involved such things as child sacrifice (Deuteronomy 13:12-17). We also read of wars being used as tools to accomplish God’s overall redemptive purposes. The Old Testament narrative tells the story of how God replaced wicked nations with a holy nation, one that would bless the entire world (Genesis 12:3; Deuteronomy 4:1-8).

The Old Testament rationale for war does not make me cheer when I read about how thousands of men are killed, their wives are taken by Israeli victors, their property is destroyed and entire nations are either obliterated or displaced. These are somber realities of war. Even if we consider wars to be just and necessary, they still lead to unmitigated suffering.

This includes the Biblical ones.

Where do we get our beliefs? Three theological perspectives have significantly shaped my Christian identity: Evangelicalism, the early Methodist tradition and liberation theology. From my coming to faith in a Baptist church and throughout my education in a Baptist school and college, I was nurtured by convictions that emphasized a spiritual rebirth, a personal relationship with Jesus Christ and the centrality of the Bible. Even when I disagree with certain aspects of evangelicalism, it has deeply influenced my sense of what it means to be a follower of Jesus Christ. My seminary studies spawned my interest in early Methodism, particularly its approach to spiritual formation. Its leaders were convinced that only a foundation of doctrine and discipline would lead to a meaningful transformation of the heart and mind. In other words, having the mind of Christ enables me to be more like Christ. Life in a suburban culture obscures the increasing gap between the poor and rich, as well as the Bible’s close identification with the poor. My doctoral work in socio-cultural context exposed me to liberation theology, which helps me see redemptive history as a history of oppressed groups, written from the perspective of the powerless, about a God who is actively involved with the poor in their struggles. I am now the pastor at Huntingtown United Methodist Church in Calvert County, Maryland. Together my wife and I are raising 4 young theologians.
View all posts by Corey Sharpe →
This entry was posted in Uncategorized and tagged just war, pacifism, war, warfare in the Bible, wars in the Bible. Bookmark the permalink.