The Stench and Filth of Maundy Thursday

“…what I lost I think of as sewer trash, so that I might gain Christ”(Philippians 3:8).

Jesus washed his disciple’s feet on Maundy Thursday. There was so much drama around the dinner table that night that we can easily overlook this part of the story. In John’s Gospel, Jesus takes off his robe, wraps himself in a towel like a slave, and washes the feet of his disciples. 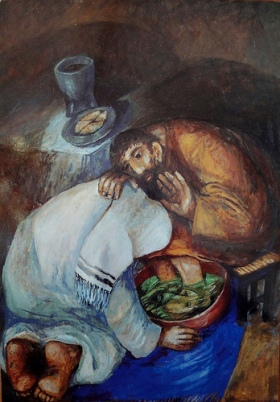 Movies and artwork usually do not give an accurate picture of how dirty streets were in the ancient world. People dumped their garbage and human waste in the streets, and people walked through it. When dinner guests arrived they reclined at the table, while the lowliest person in the household washed off the waste and garbage that was on their feet.

In Philippians 3:8, the verse quoted above, Paul uses the Greek word skubalon – which appears only once in the New Testament. Most modern translations use the word ‘rubbish’ or ‘garbage,’ but I like how the Common English Bible translates the word as ‘sewer trash.’

Jesus didn’t just wash the dust from his disciples’ feet – he washed off the garbage – and perhaps even the human dung. He didn’t shy away from the really disgusting work. While Holy Week is a time for contemplating on the benefits of Christ’s death, let’s not ignore the lessons of his life.